Grappling with the Revision Monster

Grappling with the Revision Monster

When it comes to my fiction, I am alternately driven and confounded, which I guess is as good a sign as any that it's worth pursuing.

I came into grad school scoffing at those who might write me off as merely a journalist, since my foundations were always in creative writing and fiction, and since I applied what I knew about that craft to the best of my nonfiction work. I think where I am now in my development is picking at the lock of revision, struggling to open the secrets that lie guarded there. Maybe there's a danger in making too much of this. You simply work at the material until it is ripe, until it moves, until it hits the target cleanly. But then, it must be a particularly sticky challenge since for many the material comes rather easily, but realizing the material's potential takes a great deal of time -- and work.

It is probably also a sign of my still-toughening skin in the matter of writing fiction that whenever I ask for criticism there is the blush of hope that my critic will be bowled over, and the material will have been born whole and perfect. And that when criticism comes, on the first read I fail to detect the positive feedback, and hear only the questions, and the cuts, and then despair that I'm truly in over my head, the secrets won't be unlocked, the way is barred.

Thankfully, I give criticism a second read, and then a third. And begin to calm down. And remember that if my journey has led me this far, perhaps equipped with a thicker skin I can make it a bit farther down the path.

Eventually you've got to shut out the demons you conjure to stymie yourself and focus on the real task at hand, that by dismissing your inner doubts as so much poisonous and unproductive black smoke, you can instead find the real and helpful voices that can lead you from a heap of drafts to a stack of finished pieces.

Yikes, maybe I spent too much time reading The Legend of Sleepy Hollow this morning. (In an old supplementary reader, published 1880.) Stripping all the artifice away, I guess I'm saying: Do we ever get over that childlike voice in the heart of us wondering, "Am I any good? Do I have a shot?"

So many variations on the answer to that, when the only one that matters comes from myself. And with that weighty prelude, I dig in to revising, hoping that I find a way for the arrow to hit the mark.

All My Good Buddies Read Me the Nightly News

I was minding my own business Friday afternoon, zonking in front of the TV while my son caught a snooze upstairs. Sportscenter was on, the wife wasn't home yet, and I'd been alternating ZZZZs and "huh's?" since sinking into the couch.

Well, I wake up to my friendly evening anchor faces, Brian Kenny and Jay Harris telling me what's up in the world of hockey scores and basketball trades and yeah, the usual everyday string of steroid hearings, drug arrests and coach recruiting violations, when a birthday party breaks out.

Bill Walton, basketball Hall of Famer and ESPN analyst, waltzes into the room on his rebuilt knees and brandishes a birthday cake before Harris (his 43rd, according to Wikipedia), warbling in his Deadhead drawl, "Happy Birthday to you...."

I had to blink a couple times, pinch myself. I grinned a little, at first, but this scene went on for a bit. And when I began to notice the camera angles -- those full-body shots so many news shows are going to lately, to vary it up, I guess -- and the canned chummy dialogue began flying about like so many rubber snakes uncorked, well, my sleepy grin bent to a snarl and I switched off the damn TV to get an honest 40 winks.

I just don't get the phenomenon of news "personalities" trying so damn hard to be your buddy, to bring their, well, lack of personality bumping into your living room like a relative you never asked to stay over, but keeps hanging around, munching your milk and cookies.

I'll try to dredge up some examples from my mind dump. OK. So there are the full body shots, the anchors walking or pacing in a studio before some huge screen, when we used to only get the awkward backwards shuffle on feature off-site interviews. There are all the weird props, like CNN has unveiled for its political coverage this season -- the kind of dynamic feeling they achieve there is on a level with Paula Abduhl dancing with a cartoon cat: childish, and a little creepy. There are the football preview dudes, standing around on their painted studio football field before huddling up and running a few plays. They way they look over their shoulder at you, as if you were standing on the fringes of their group, is more than a little disconcerting -- are they going to call my number? Hit me with a pass? Oh, God, will I have to decipher the quarterback's cadence? LAME TWENTY-FOUR-SEVEN CHUMMY TALKING HEADS... HUT HUT HUT.

You just end up feeling sorry for them, like at an awkward corporate function or high school reunion. They're trying so damn hard for you to LIKE them. We're uncomfortable, they're uncomfortable, and it's because they're mostly bad at it. The Weather Channel people ought to be honored with a Wooden Spoon award, or a Pullcord Dummy statuette, or something. I mean, it's weather, right? Just give me the highs and lows and the outlook for the weekend and save the comments about your bikini or barbecue or quotations from Whitman for your next keynote speech at Bumblef*** Vocational Tech.

It's just that I don't need any more buddies in my life, canned voices trying to sell me something I shouldn't look for on the TV or from a telemarketer in the first place. Part of giving yourself over to the mindless glare of the TV is forgetting you're doing it in the first place. Real skill in getting you to tune in is making you unaware of the hours you're devoting to it (hey, it's a national average), sitting in one place, imagination on holiday, colors flashing across your eyes, butt growing numb. And then Heather Tesch and Nicole Mitchell start riffing on actual evapotranspiration and it's not just the weather anymore, it's amateur hour at the local Funny Bone.

And you don't even benefit from the two-drink minimum.

I may be the voice crying in the TV wilderness here, but spare me the small talk and buddy-buddy stuff and just read me the news. Give me the scores, tell me the forecast, and let me enjoy my own off-key birthday warble from my own relatives and friends.

We'd ask you over for the birthday dinner, but I think you've already had your fill of smoked ham and cheesy corn.

Posted by Colt Foutz at 1:33 PM No comments: 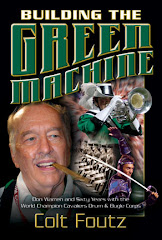